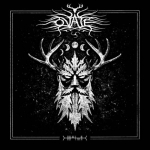 The Norwegian band OVÁTE is the brainchild of a certain Aindiachaí… He and his two members (guitarist / bassist Aindiachaí and drummer Brodd) have performed live with such bands as TAAKE and GORGOROTH. The album also includes vocal contributions from Hoest (TAAKE and GORGOROTH), V’Gandr (HELHEIM and TAAKE), Eld (KRAKOW, AETURNUS and GRAVDAL), Ese (SLEGEST) and Ødemark (THE 3RD ATTEMPT). To say, however, that OVÁTE and TAAKE have similar connections would be mistaken as OVÁTE takes the listener down a slightly more traditional path than some of the more recent TAAKE records. Each guest singer wrote the lyrics of the song they played, except for Cough who used an excellent Norwegian poem by Tor Jonsson entitled ‘Song Til Ein Orm (‘Song For A Snake’). All lyrics fit very well with the ideology of the music and its inner essence. Aindiachaí expressed in one of his interviews that an "Ovate" is a kind of druid. The Druid Order was by nature a tripartite consisting of the Ovates, the Bards and the elite Druids who served as president of the Order. The purpose of this Order was not so much to enforce hierarchy but rather to ensure that only the "clean" had access to this secret knowledge. The word "Ovate" or "Vate" comes from the Irish "Faidh" from which the English words "fate" and "faith" are derived. The words “Veda", ”Vedic“ and "Edda" can also be traced back to this word. The Druids / Ovates were legal authorities, legal speakers, and guardians of knowledge, medical experts and political advisers. They interpreted everything that has to do with nature and were also known as the “Serpent Priests". He also expressed that “the album goes much deeper than just the Pagan aspect and the lyrics are more about the spiritual side of nature and the universe. Lost traditions must be explored and reintroduced and incorporated into society. Of course there are only a few who share these ideologies, which will never happen”. The record opens with ‘Morgenstjerne’ which is a fine unit of traditional Black Metal with tremolo picking and an overarching Viking sound. V’gandr of HELHEIM is the lead vocalist on the track and fans of HELHEIM will recognize both his lead voice work as well as the very HELHEIM-esque chorus that comes late in the track. ‘Song Til En Orm’ is the second coming and the song starts out very Black’n’Roll and more reserved of later Norwegian style sonics. ‘Song’, in its later segments, takes the listener down slightly darker variations of the earlier theme and riffs. The tremolo slows down a bit and Hoest’s vocals are given a bit more space in the final minutes. In comparison, ‘Illhug’ is a bit slower than the first two tracks. There are fascinating lead works in the latter part of the track and this is one of the characteristics that makes this record varied and connective. The fourth track, ‘The Horned Forest King’ is like getting back to the forest with its atmosphere and tempo and enchanted by its grasp. The mysterious figure on the album cover is an image of Cernunnos, the horned (deer) god who is also known as Herne, Herme, Thoth and Mercury. Aindiachaí, expressed in one of his interviews that “He was the Celtic god of the initiations and the gates between the different realms. The image itself can be dated back to 8,000 BC and is still used on, for example, every page of the Irish passport. Both Brodd and I had the idea to put this figure on the cover, but it was Phil Robinson from the Níðhöggr Studio who did an excellent job with drawing the cover”. All in all, OVÁTE bring us a five track release that is certainly familiar to Norwegian Black Metal listeners, yet also refreshingly diverse. Brodd and Aindiachai have really put together something special here and provided stellar performances on extremely well-crafted songs which deserve loads more spinning to get deeper into it. Find out more about the band at: www.facebook.com/ovatemusic, or visit their label page: www.soulsellerrecords.com