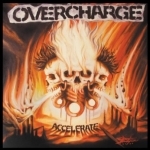 Debut album of this Italian Speed / Punk Metal band as they have been labeled, and I cannot agree more. The raspy vocals sound like if Lemmy had a heavy sore-throat but he is still able to sing even with a few wicked melodies in there and for some strange reason he adds some Death Metal influence in his voice. And yes, the riffs are quite in your face and straight, with a very heavy dose of obvious MOTÖRHEAD and VENOM running in, as well as some more metallic Punk in the DISCHARGE, EXPLOITED or early D.R.I. vein. At just below the 30 minutes mark, this is exactly what the cover art depicts, with a very good and powerful production, and the catchy drunken riffs you know you have heard before, but played with a very good dose of energy. Actually this is quite fun to listen to, and it is a perfect album for having a good drinking party. Some songs have that SODOM sound in there, you know when SODOM goes in MOTÖRHEAD mode. People who like bands like MIDNIGHT and BAPHOMET’S BLOOD will surely like this. And Lemmy followers thinking what would be if the man of moustache had a more Punk / metallic approach, this is for you. This one grows and if the band goes on, and I am sure that they kill live, they are in to take a crown of 3 old bastards that we do not want to go, but when father times has its toll taken, I can almost hear them introducing at a show “We are OVERCHARGE and we play Rock’n’Roll!” www.facebook.com/overchargernr, www.unspeakableaxerecords.com