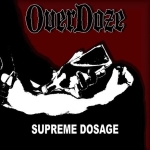 Introducing OVERDOZE: “In summer 2009 Valtteri and Markus decided to drag their instruments and recording gear to Valtteri’s summer cottage. They spent the midsummer holidays playing together in a barn but couldn’t get anything on tape due to the fact that they were too wasted all the time.“ They were too wasted! Who would have guessed? What a fancy and absolutely not predictable concept of a band who is called OVERDOZE, being too wasted. Personally I find humor with or about booze always tremendously hilarious and totally odd. Not only the album is called “Supreme Dosage” the whole concept of OVERDOZE is, of cause, overdosing. And therefore it’s not getting too complicated lyrically. Musically wise it’s a refreshing glass of Hardrock with an aromatic Hardcore / Thrash / Beat-down foam. And some experimenting around with all different kinds of styles, techniques and sounds. Whereby everything is convincingly implemented. The bass has the space he needs to ensure the right pressure for this stuff. Guitars and drums are tight played and mixed. They somehow had to be sober at least for a few days. Still they don’t have anything too surprising to offer. Most of the time it’s Punk Rock influenced riffing the 90s style. Means Metal sounding guitars and drums but simple melody and chord sequences. As little gimmicks they drift onto Prog elements, romantic guitars or Heavy Metal solos once in a while. Not to edgy though. On top of that is that “100 percent male!” voice which gives me shudders. He has this idea of sounding tough by trying to lower his voice and bark like a cheap acting WWF fighter. Added to this their lyrics about how he beats people down, fucks shit up and drinks an ocean of booze, makes it more or less ridicules. Just the right soundtrack for a small town garage party. Bawling, booze and BBQ somewhere between TERROR and PANTERA! Therefore check: www.facebook.com/overdozemetal