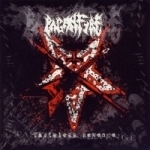 Raw and aggressive old style Thrash Metal from the true Mosquito Coast, the Muslim infested wastelands of the Philippines. Recorded live so there is no excuse for studio effects by any grime fingered producer or some such other gremlin finding a way to fuck up PAGANFIRE’s recorded works. "Tasteless Revenge" is easily some of the most pure grade adrenaline you can find, untamed and unrestrained. For fans of the old South American scene mixed with German antagonists, put into your mind a hellish meeting of SARCOFAGO, PENTAGRAM, PROTECTOR and VIOLENT FORCE. Yes PAGANFIRE is this good! On this four song cassette side "Thrash Fucking" features ‘Pagkakamaling Panahon’ (Instrumental) and ‘Metal Thrashing Militants’. The flip side – side "Metal Attack" has ‘Glorious Arson’ and ‘Hate Vanishing Point’. You like it fast, you like it loud and you like it fucking Metal!?! PAGANFIRE is tough to beat! Check out this EP and the following recordings also out now as this review goes to print: "Duburog! Lilipol! Demo 2006", Split w/ EVIL ATTACK (Chile), Split w/ BEAST PETRIFY (Singapore), Thrash Metal Blitzkrieg Vol. 1 (Deathstrike Records) and the original Mabagis Demo (U.S. version) through Eternal Darkness Creations. I can’t wait to hear an actual album’s worth of material. Definitely a band to watch for! Contact: www.geocities.com/paganfire13 or paganfire13@yahoo.com or Nonoy Padrejuan, 60 Narig St., Veteran’s Village, Project 7, Quezon City, 1105 The Philippines or Mohd Khairee, P.O. BOX 7937, 40 732 Shah Alam, Selangor, Malaysia.