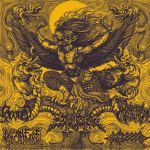 Necroscope Zine has been one of those pages widely recognized for their loyalty in the underground on every corner of the planet, and they still remain the same after 27 years of devoted existence for obscure Metal. The present 5 way-split is attached to the pages of their 35th issue, with a striking front cover where a sort of five-headed demonic Garuda invites you to delve into this bestial conjunction of bands that offers 2 songs each. The split is also available through Bestial Invasion Records now. The opening fires are in charge of POISONED, a Polish band that lurks on the same path as their countrymates THRONEUM. ‘Altar Of Death’ begins with a simple but effective acoustic guitar, giving lead to a tempo assault as MORTUARY DRAPE did on their first works, while the crude vocals let fell onto this hate amalgam of dark traditional Metal. ‘Sadistic Murderer’ continues the Death / Thrash maelstrom to end their turn with a slow paced but catchy part, where vocals take centre stage with memorable and well pronounced blasphemies, great overture by the hand of POISONED. The next ones to expel their evil chants are the Peruvians from DEATH INVOKER, giving no time to recover your breath with ‘Deathrashing Rage’, where the South American feeling of HADEZ, VULCANO and SARCOFAGO is represented so well, especially on the short-delayed and rhythmic vocalization, as well on the strings that doesn’t sound overcharged with gain or tone, resulting on the classical formula made decades ago. ‘Witches Hammers’ keeps the inertia, this being a song from their “Necromancy, Damnation, Revenge” EP, with a chorus that reminds me of HELLHOUSE’s “Burn For Peace” demo somehow. Perfect transition between outrageous bands, but now it is time for two bands from the Philippines, PAGANFIRE and PATHOGEN, where the first one is highly ingrained on Thrash Metal as SADUS, MORBID SAINT or SODOM used to do. Even they dare on ‘False Protector’ to homage / steal a riff from SADUS’ ‘Certain Death’, but after some dull solos with no intention and nothing ground-breaking at all on both songs, it is time to advance to PATHOGEN. ‘The March To Megiddo’ and ‘Wretched Gleam Of Disorder’ detaches from the previous band on influences, bringing back strong nuances of HELLHAMMER / CELTIC FROST, BENEDICTION and MASTER / DEATHSTRIKE, where a compressed and dark sound prevails. Important to remark the bass sound, which is muddy and distorted without definition and presence, but it works amazingly on the mix in spite of their unconventional characteristics, turning out to be a great teaser of their work. Last but not least, the Chilean fiends of DEATHLY SCYTHE are responsible to hammer the final nail in this split release. After their astonishing “Celestial Darkness” EP, they came back with hate as always with a couple of manifests entitled ‘Where I Belong’ and ‘Legacy Of Darkness’. These tracks maintain their sound and evil feeling with a sound influenced by POSSESSED and South American old glories as SADISM, PENTAGRAM and SEPULTURA. The voice is on the verge of breaking his vocal cords as EXCORIATE (GER) to exemplify, as the pounding drums are totally about brutality and strength rather than technique, accompanying the riffing without mercy which leads to refresh a classical sound with a strong and doubtless will. ‘Legacy Of Darkness’ is a highlight, starting with an obscure bass lead and ending with a disturbing short piano piece, but in the middle of this resources is all you need to hear, top notch evil aggression. To sum up, this split release is a great teaser of what is beyond your eyes and ears within the ridiculous amount of soulless and pretentious releases that hinder the perception of everyone who’s looking for Metal without make-up. Take your zine then, put this release on your CD player, and destroy yourself or order a copy from www.facebook.com/bestial-invasion-records-247631521920716.