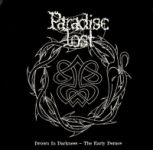 Before doing this review I had never really listened to PARADISE LOST. I knew who they were of course and that they were a celebrated Metal band, but I never had sat down and listened to any of their releases. Since I was going to be reviewing “Drown In Darkness – The Early Demos”, which brings together their 1988 demo “Paradise Lost” and 1989 demo “Frozen Illusion” along with the “Plains Of Desolation” bootleg from 1989, I decided I’d check out some of the band’s material. I worked my way through a few of the bands albums and found a band who could create very dark and atmospheric songs, which served as the blueprint for Gothic Metal bands like NIGHTWISH et al. So when I finally got around to listening to “Drown In Darkness”, I was expecting to hear a less polished version of their dark, melodic Metal. I couldn’t have been more wrong. There were no pianos, no synthesizers, no operatic vocals, let alone melody to be found on “Paradise Lost”, just 3 tracks of old school Death Metal, which were clearly influenced by MORBID ANGEL and early SLAYER! Opener ‘Drown In Darkness’ opens with a death growl that Dave Vincent would be proud of and the harsh / sharp guitar tone could have been set up by Trey Azagthoth himself. Indeed, all the lead guitar parts are clearly influenced by Mr.Azagthoth. ‘Internal Torment’ has a very cool chugging intro riff that has an almost OBITUARY like mid tempo feel to it and goes on to sound like it could have been recorded for a GRAVE album. Being a demo, the production isn’t exactly of the highest order, as expected, but the sound isn’t too mushy, which was a problem on many early Death Metal releases, and every instrument can be made out. Overall a very good collection of mid paced Death Metal, that’s definitely worth a look, even if it isn’t very original sounding. “Frozen Illusion” is a much, much slower, bowel shakingly heavy collection of tracks. The track ‘Frozen Illusion’ is a crushing, trudging song in the vein of ‘God Of Emptiness’ while ‘Paradise Lost’ doesn’t stray too far from that blueprint either. A slightly altered ‘Internal Torment’ , which also appears on the “Paradise Lost” demo, does speed things up a little but still moves along at a galloping, mid tempo chug which is quite similar to its initial form. The production on this demo does improve slightly from “Paradise Lost” to “Frozen Illusion”. One thing that struck me about the two demos was that the guitar leads were almost identical on every track; the same horror movie style, tremolo bar happy leads popping up over again and again, which did get a bit annoying and there wasn’t too much variation in the riffing either. The drumming and vocals were of top quality and were the high points of each demo for me. The bass was almost indistinguishable from the mix however. The inclusion of the “Plains Of Desolation” bootleg is a nice edition, especially for long time fans and also lets us hear the songs played at a slightly faster tempo, which is particularly effective on ‘Internal Torment’. However, it features 3 songs which are already featured on the demos and so this does lead to a bit of overkill (‘Internal Torment’ is featured 3 times overall!). The sound quality isn’t great either on these live tracks and the vocals dominate all the songs, making the rest sound like static at times. While it is really interesting and amazing to see how much PARADISE LOST’s sound has evolved from these early demos, there really isn’t much on this release that would be overly attractive to non PARADISE LOST fans. I would definitely NOT recommend it as an introduction to the band, as there sound has changed drastically over the years. However, if you are a PARADISE LOST fan, then this is an interesting look at the bands early material and style and is well worth checking out, even if its just for curiosities sake. www.paradiselost.co.uk, www.centurymedia.com