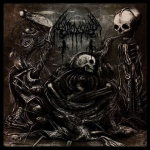 PAROXSIHZEM is a filthy Black / Death Metal band from Toronto, Canada, active since 2007. After the release of two demos, 2012 saw the release of their self-titled debut and four years later, the EP that the band has set as a bridge for their second full length. “Abyss Of Excruciating Vexes” is a collection of five songs (one of which is a ARKHON INFAUSTUS cover) where the band goes on to explore even heavier, faster, violent and extreme areas, when compared to their previous recordings. The band stated that the MLP themes were focused on “Relentless torture, maniacal hatred, drug induced lunacy and madness”, which is exactly what happens throughout every listen! This cavernous mini album was mastered by Damian Herring (HORRENDOUS) at Subterranean Watchtower Studios, so expect nothing but full audio quality on this! The artwork and layout is the work of PAROXSIHZEM’s own vocalist, Krag and it fits perfectly with the album atmosphere. If this is a bridge for their second full length, I cannot wait for its release! Definitely something for immediate purchase for fans of any Canadian Black / Death Metal band (ADVERSARIAL, MITOCHONDRION, etc). More info at www.facebook.com/pages/paroxsihzem/293704858374, http://paroxsihzem.bandcamp.com, www.hellthrasher.com