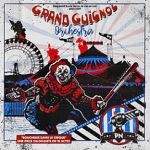 This album begins like a cinema superproduction – like you are entering some sort of grotesque 19th century fair. Then the circus music begins, very well done, and accompanied by very fast Death Metal drumming that sounds a bit misplaced. Strident, weirdly played instruments like accordions and horns, together with some wailing vocals, create a true madhouse of a musical experience. This band is supposed to play avantgarde Black Metal, but I hear far more experimentalism and lunacy than properly Metal. So one thing I can easily say is that this is by no means your typical Metal band. It is multifarious and extremely impressive insofar as it must have been a hell of a lot of work to compose and arrange all of this. It often descends into an exercise in musical insanity and I’d say you must be in the right mood to stomach this. Still, it is original, crazy, operatic and surprising. In between some more Metal parts you can have pure carnival music being shaped into some sort of classy horror soundtrack. The magnitude leaves me awestruck, but I do wonder whether this can be enjoyed as more than a novelty and an album you listen to for the fun of indulging in such a wacky travel. Also, the effect of surprise and amazement eventually wears off. Still, it must be appreciated how the myriad of instruments are utilized in the creation of an ambiance that takes one back to some idealized musical freakshow of distant decades. In short, surrealistic, intricate and deranged. If you are not one of those people who are afraid of clowns and wish to embark on this mad, mad ride, buy your ticket at www.facebook.com/pnrecords, www.lesacteursdelombre.net