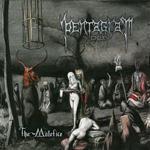 To be honest, I belong to probably quite a bunch of people out there who discovered the Chilean act PENTAGRAM rather late – due to NAPALM DEATH’s cover version of ‘Demoniac Possession’ some years ago – and am the wrong person to judge if “The Malefice”, the band’s first ever proper full-length which comes along seven re-recorded early tracks on the limited first edition, does justice to their legacy of old. But I doubt there will be anybody complaining about such a classy, well composed and powerful piece of vicious Death / Thrash! Originally inspired by the likes of VENOM, SLAYER, POSSESSED, the Chilean PENTAGRAM, now officially labeled PENTAGRAM CHILE were among the first really extreme acts from South America and vocalist Anton Reissenegger is quite known for his work with CRIMINAL and great CELTIC FROST worship INNER SANCTVM and simply a really nice guy I met a few times during the past years. Guess I will never forget a moment at that abominably huge Wacken festival some years ago when I was walking around in one of the shirts from the band’s Dutch show with PENTACLE and being hailed by a group of totally excited Chilean Metalheads for it while the humble Mr Reisseneger simply sat a few meters aside at the bar and none of them realized, a bit ironic, isn’t it? But how are things in this day and age? Is this a reunion album the world should actually appreciate or forget about rather quickly? Fortunately, it is a hell of a return! “The Malefice” offers finest aggressive and dark Thrash Metal bordering its heavier and more fierce cousin named Death Metal quite often, an impressive cast of guests (Tompa Lindberg, Schmier, Marc Grewe, Mauricio Peña – brother of original PENTAGRAM bassist Alfredo "Bey" Peña, who committed suicide in 1990) and is visually blessed by an absolute stunning and gloomy cover artwork. Production-wise the band did not walk into the “let’s make this sound modern” trap either, but retained a certain rawness while not trying to emulate the naiveté of ancient, long gone days. It sounds incredibly inspired and on fire and right between past glory and this day and age. The riffs, the vocals – which are in this throaty HOBBS ANGEL OF DEATH, DECEASED, CELTIC FROST fashion and only few bands can deliver as intense as here – plus the punishing drumming by Juan Pablo Donoso (SADISM, THORNAFIRE) and the guitar work of Reissenegger / Uribe are simply a pleasure to listen to and only the rather dull riff underlined by a steady blast beat in ‘The Apparition’ did not fall into place as neatly as the rest of this opus. ‘The Death Of Satan’, ‘Sacrophobia’, ‘La Fiura’ – arrrghh! There’s some really killer, regularly SLAYERized tracks on here and a “newbie” to PENTAGRAM CHILE like me is even happier with the bonus disc featuring ‘Demoniac Possession’, ‘Spell Of The Pentagram’, ‘Fatal Predictions’, ‘Demented’ and more in merciless, up-to-date versions that I enjoy a lot, too – man, these RIFFS!!!! After almost 30 years comparing PENTAGRAM CHILE anno 2013 with the cult formation from the tape-trading circuit of the 80s is pointless, but listening to this sheer amount of deadly thrashing quality makes me wanna scream along, bang my head and drive like a maniac on the way to work and I consider that a damn good sign! Overall, easily my favorite this year in terms of Thrash, so better check it out or you’ll be goddamn sorry! This is not just a reunion, this is a reinvention! Hear a song here. Buy or die a poser: www.cyclone-empire.com. More band info at www.facebook.com/pentagramchile1985