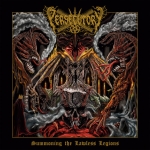 PERSECUTORY are a Black / Death Metal band from Istanbul, Turkey. “Summoning The Lawless Legions” is their second full length album and their second release on Godz Ov War Productions. Experience tells us what to expect in most scenarios and with PERSECUTORY it’s not too different, I was hoping for a middle of the road Black / Death approach and it is pretty much how the entire album is. The first thing about the band is their riffs are akin to how EMPEROR approached riffing, remember one of the greatest openers of all time, ‘Into The Infinity Of Thoughts’? Although not as ferocius, PERSECUTORY approach their music with equal parts heaviness of Death Metal to even out the chilliness of Norwegian forests. ‘As The Serpents Ascend’ is a good opener, checks all boxes and frankly sounds delightful. The band isn’t in any hurry to break any records or mark any territories, they take their time to set up the pace. The drumming is the strongest element on this album, sticks to what is absolutely necessary and doesn’t stray from that path throughout the entirety of the album. Although there are areas where the tone kind of takes you by surprise, but that’s alright. I suppose the Black / Death fans will eventually come to this release, but if you’re reading it, check out “Summoning The Lawless Legions” for sure. It won’t blow your mind away, but it is a good quality companion to the wildness that is out there. The solos are melodic and very well composed, whilst the overall atmosphere meanders between denseness and delicacy. The vocals don’t stretch to the extreme, but rather operate within the parameters of the sound of the band. All in all, a decent listen, for more information please visit: www.facebook.com/persecutory666, label contact: www.facebook.com/godzovwar