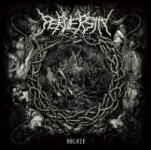 For a band formed in 1995 in Slovakia, and this being their 4th full length release, I was expecting quite something more. Certain styles as brutal Death Metal with deep low vocals can prove limited and hard to create something out of the ordinary. And this is where PERVERSITY falls. Their style of brutal, semi-technical Death Metal played with precision can become repetitive and too complex for its own good. Whilst not in the vein of the weirdly called "Math Metal", there are many strange and sudden rhythm changes, for making this to have a bit of variety, but I found those lacking coherence, thus taking away the sense of a song, and sounding more of like a collection of riffs. Although they use a very heavy and bassy production, at times the final result sounds too polished. The best reference with this band will be IMMOLATION. When I was talking about a certain style that can be really tough to still come out with something interesting, the NY based band has always being the reigning kings in the field and prove that the style is far from being stagnant. The use of subtle morbid melody hook, not abusing from dissonant rhythm changes and to make things coherent even if they use complex compositions, is something few can achieve like the Ross Dolan fronted band. In that essence, some songs like ‘Bloof Of Hastur’ has a bit of that thing I am talking about; still at the end they don’t seem to deliver what they can do. If the band decides to o for a more straight forward approach, where the use of morbid melody hooks is present, I am more than sure that it will raise them to new heights. As it is, this is a competent product with a great cover art, although only those followers of the brutal death metal camp will appreciate more than those more demanding extreme Metal fans. www.myspace.com/perversityband, www.lavadome.org