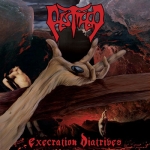 PESTIFER from Portugal, active for two decades already, finally present their first full-length entitled "Execration Diatrobes“. After hearing the first tunes of this nice output early MORBID ANGEL immediately came into my mind but also mixed with some slight notes of early CANNIBAL CORPSE in a quicker version. The album starts with an intro before the opening track ‘Mars Exult‘ starts crushing some serious bones. This track represents all what the band and their first album is standing for. US style old school Death Metal with a modern painting. The blast-beats and the ever pounding double-bass really kick ass and sound brutal and old school but also very modern played. The tempo varies from fast to slower parts before turning into organized chaos again. The solos are damn good and are really honouring Trey Azagthoth. The direction gets continued with tracks like ‘‚Brutal Eruption Of Chaos‘ but also with the remaining seven tracks. Similar to mighty ANGELCORPSE the guys bring back good old early 90s feelings with their material but also manage to get this played very fresh and unused. I guess MORBID ANGEL would like to sound that way nowadays. Especially the breaks and the precise riffing combined with the brutal but good dozed grunts, which are very good to understand by the way, really make this album a nice journey back into the golden times of Death Metal. But the band also can write slower material like ‘Awaken By Death‘ which is a really cool and groovy song and sounds like their personal hommage to mighty SLAYER. The production is clear and very powerful and the old school cover artwork rounds off this cool first album. Hopefully it will not take them another eight years for a second output. More info can be found at the following locations: www.facebook.com/pestiferofficial, www.lavadome.org