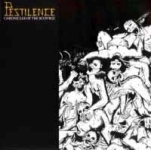 I can’t exactly recall how many email requests I’ve send to good ol’ Spencer of Metal War Productions to obtain a review copy of this album here. It definitely must have been ALOT, so yeah – it’s true, somehow I made a complete fool out of myself in this case… Anyway, I finally have it in my possession now, but in retrospect it unfortunately wasn’t really worth the effort, to be quite honest with you. Don’t get me wrong – I totally worship the van Drunen era of PESTILENCE, but the overall quality of these live recordings here is of rather poor nature and way closer to a bootleg than to an official release (which it seems to be as Martin van Drunen himself was involved in the realization of it). Two shows from the early days of the band got included (Veghel, Netherlands – June 24, 1989 and Bochum, Germany – November 18, 1988) with a total of 18 tracks, all of them from “Malleus Maleficarum” and “Consuming Impulse” of course. If you’re used to old live tapes, you probably won’t have a problem with it, but if you’re expecting a professionally recorded live album you better not even consider checking this one out. What works for tapetrading is not necessarily justified to be released on disc… especially not if you will have to pay money for it. Another negative aspect about the release is the fact that the crowd reactions in-between the songs were completely cut out, for unknown and totally unnecessary reasons if you’d ask me. So, the only positive aspect for PESTILENCE die hards (apart from the cool vintage picture collage inside and Patrick Mameli’s original “Consuming Impulse” cover idea which was used on the front) is the previously unreleased studio track ‘Consuming Impulse’… but even that is just an instrumental, probably recorded only on a 4-track or something. So, my suggestion is: better get yourself free tapetrading copies of the (complete) shows that were used for this release instead of spending money on a CD version. For more info: www.metalwarprod.com