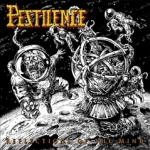 For any old school Death Metal fan reading (or hearing) the name PESTILENCE brings a smile to their face, at least in regards to their older material. You want old material? Well, this is about as old as you can get, as "Reflections Of The Mind" features the band’s 1992 demo and some early rehearsals from 1991 through 1993 (well, I wouldn’t consider this "old" when it comes to PESTILENCE since their earliest demos date even back to 1987… so, this is already the band that started to evolve in the quite technical / jazzy direction years later – Frank). 18 tunes in total, with over 70 minutes of music. Now I personally have never heard this demo before and I’m listening to it for the first time now. It just blows away most of the Death Metal of today, I can tell you that. Just bone crushing riffs and you can already hear the typical PESTILENCE sound on this demo and the Jazz like fusion sounds too. Guitarist Patrick Mameli sings vocals on this and his voice kills. A perfect low growling, but not cup the crap mic Death Metal singer. Now after the demo, there are a bunch of “rehearsal” tracks that sounded good to these ears. When you are used to hearing demo tapes and “rehearsal” tracks back in the 80s listening to stuff like this is no problem and this is not just a wall of noise. The band sounds tight as fuck on these tunes and again this is like how you can see the band crafting their sound and back then there were not many bands sounding like these guys, I can assure you of that. Pure originality for sure and horns up to the band for giving Vic Records this fantastic material to release. More band information at: www.facebook.com/pestilenceofficial, label contact: www.vicrecords.com