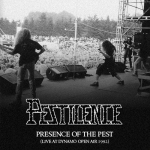 A band shines the most when playing live. Yet, I am not so much a fan of live recordings… weird. Still for a live recording to be something worthy of my money it must have something special. Usually in extreme Metal we are used to have live recordings as bonus tracks with sound qualities varying from decent to really bad. And sometimes these are just fine as that, as fillers. But once in a while some live recordings are released that are truly a jewel. And this one is one of those. To start with, it is the fantastic sound of this main recording done at the Dynamo Open Air in July 1992. Truly a great recording with heavy guitars, killer drums and even a great bass sound. It was the time this once great band called PESTILENCE was at the top of their game. As a matter of fact I was able to witness this band that same year a few months later, on their “Testimony Of The Ancients” tour. Basically the set was consisting of songs from that album and the monumental “Consuming Impulse” and sadly they were only doing just one song from the mighty debut “Malleus Maleficarum”. As you all know by now these Dutch men were now Drunen-less and leader Patrick Mameli took over vocals. Although more limited in the growling style, Mameli still does a very good job and even the songs done with the now ASPHYX frontman sounded very similar. I must mention the amazing playing this band was capable of, reaching near perfection levels. This is one of the most memorable live bands and recordings I have ever heard with only classics performed. You get ten tracks with a fantastic sound and as bonus seven other songs from a similar setlist with some different ones from an earlier concert that year also in the Netherlands but with a more underground live sound. It was a shame what happened to the band even as I like the weird “Spheres” but I was totally let down by their returning material, although they remain to have killer musicians, the spirit of old is still missing and these great live songs confirm that. www.facebook.com/pestilenceofficial, www.vicrecords.com

Julián “Out Of The Body” Núñez

Julián "Out Of The Body" Núñez