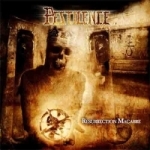 The time has, at last, come for another PESTILENCE record. BENEDICTION released one, ASPHYX are planning one, as are UNANIMATED, and RESSURECTION released a new one a scant few months ago. Since all the noteworthy bands of times past are re-uniting for perhaps the last time before throwing in the towel, Patrick Mameli, through the coercion of eager fans, brought the band back together to spread PESTILENCE across the world one last time. Whether or not he’s succeeded, only time will tell. Thus far, his record is hit-or-miss. The album is predominantly a cross between “Consuming Impulse” and “Testimony Of The Ancients”; the heavy riffing of ‘Dehydrated’, cross bred with the melodic patterns of ‘Land Of Tears’. But, intermixed between this otherwise potentially flawless mix, are harmonic squeals and time changes that urge the songs towards a much more modern sound-at odds with what people rightly expected of PESTILENCE. To his credit, Mameli has not made another “Spheres”. That would have divided the PESTILENCE fan population even further. The biggest problem PESTILENCE will have to confront is die-hard fans accusing them of doing nothing more than an above average job at rehashing their finest songs. It’s a question they’ll be hard pressed to answer, for this is indeed the second, and third, album thrown together and mixed with digital audio. While this criticism has more than enough merit, I feel it prudent to remind people that PESTILENCE has been absent for more than 15 years. They can’t be expected to make such leaps and bounds a second time. At least they’ve made an entertaining record; even more entertaining for those of you fortunate enough to have the limited edition, which comes with three bonus tracks. www.myspace.com/pestilenceofficial, www.mascotrecords.com