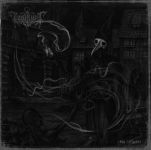 I wouldn’t call this Black’n’Roll as much as Black Metal with humourous touches. When I started listening to this album it even sounded a bit like ISENGARD’s debut, including the production, which is very dirty. Soon into the listening things became blacker, although these guys do manage to have a bit of a distinctive touch. Golzarath’s vocals have a maniacal touch I much enjoy. He sings like a demented man, and he laughs and screams and whispers. Sometimes he vaguely brings to mind Franta’s vocal antics in "Jilemnicky Okultista". The songs tend to follow a somewhat usual Black Metal sound, with a lot of Norwegian style unmuted riffs. Often they slow down to a rather doomy and, sometimes, minimalist approach. Reading this description it’s easy to imagine how much of a boring album this might be, and yet, they have enough unexpectedness to keep the listener interested, including the funny parts they include once in a while. Sometimes they can go for weird compositional structures, such as in ‘Okkultes Schlachtkommando’, with a lower sound in the mix than the other songs (apparently because they include previously released recordings in this album). That they deviate from the supposed canon of Black Metal is apparent from titles such as ‘Fuckin Hell’ or ‘Sick Occult Shit’, as well as from the very peculiar intro and outro to their homonymous track. This rude fun is far more akin to the likes of GEHENNAH than to any Scandinavian Black Metal (listen to ‘Im Zeichen Der Ziege’). In conclusion, I find this to be a worthwhile effort whose high points are the crazed vocals, the nonconformity to the norm and the muddy production in a time when you can have Morrisound studios in your PC (some will find this latter point a negative one), even though they could have at least evened the volume of the songs. www.narbentage.de, www.facebook.com/pages/pestkult/317751154926824