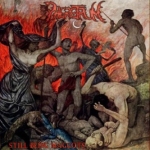 I actually think this is the first time I am going to review a band from Uruguay. Why that country isn’t more established on the Metal scene, I don’t know. The country borders Brazil in the North, and if any country from South America is established on the Metal scene it is Brazil, even though there have been quite some contenders during the years. Though we might gonna hear more about the Uruguayan scene soon, if PHERETRUM is the benchmark for the quality. We are getting a healthy dose of Death Metal, done in, the band’s own manner. They state that they started out by covering MASSACRE’s ‘Dawn Of Eternity’, though they’ve moved quite a way since then. The music is a good mix of fast and chaotic blasting, midtempo madness, with a good Thrash feel to it and all in between. This release is the band’s first full length release, and before this they have released a rehearsal demo, a single and an EP, so they still have to find their way, and what they present on this album is a bit North and South, though not done bad in any way. PHERETRUM just haven’t found their feet totally yet, but they know how to churn out intense and brutal Death Metal. A good mix of Florida Death Metal from the good old days, South American madness, and how do they get that Speed Metal sound sneaked into almost every release? Just take a listen to ‘The Path To Your Pheretrum’ and ‘Terror Reigns’ to mention two, and all out brutality and a good deal of blasting and well timed and delivered groove. The songwriting is quite intense and action packed, and we are getting some good guitar, good rhythm patterns and fierce growls. If I had a label, I would do something about this release right away. These guys should have a good future ahead of them, if they can keep the chaos and intensity going! Prepare to meet thy doom: www.facebook.com/pheretrum.oldschooldeath, http://pheretrum.bandcamp.com