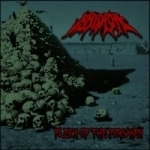 Stockholm Death Thrashers PHIDION have released a self-financed EP titled “Flesh Of The Forsaken”. I’ll be honest, I never heard of these guys before I got this to review and had to do a quick check in Metal Archives to get a bit of background on them. The band formed from the ashes of RUINS OF TIME and have been jamming out since 2003. Now Sweden has a plethora of bands that have set the bar in the Metal world (that is a topic that I can write pages and pages about). “Flesh Of The Forsaken” runs just under 26 minutes covering 6 tracks. The band does have 2 demos under its belt and had this EP released last year. I’ll start with the good. The old school Death Metal feel is rampant on the 6 tracks, but then again being from Sweden it must be pretty hard to not have that ingredient in your mix. The guitars are crushing and have a good groove, sometimes touching being melodic. The vocals are sick, just guttural from the days of late 80s / early 90s era. The drums sounded good and had plenty of blast beats, not bad considering they were programmed drums. Since the drums were programmed, they didn’t go overboard with trying to get the insane blast beat drumming every second of every minute. They added the right amount of speed and tempo to the drums on each track. Now for the bad. While I can understand that this was a self-financed effort, the production was what suffered the most on the album. Was it the bands’ intent to have that style of production??? I have no idea but I think a better effort would have taken this EP much further (especially for the bass, it is barely audible). The lyrics on the album are not that great, just your typical Death Metal redundant lyrics that I feel was another department that needed some assistance. Guitar solos would have been nice to hear and see what the guitarist’s potential can reach. Lastly, the cover art consists of a pile of skulls, while not original it still provides that “METAL” feel. Overall, this is not a bad EP. Some parts provided Thrash, some had a Doom-ier sound and since it was kept to 6 tracks you get the just of what PHIDION have to offer. A nice EP that can give the band a good starting point for future releases. For more info: www.phidion.st, www.facebook.com/phidion, www.phidion.bandcamp.com