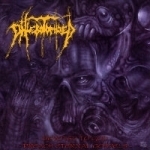 Ready for a lesson in Death Metal history? Dutch PHLEBOTOMIZED were one of the first bands to combine classical early Death Metal with avantgardistic, doomy and progressive elements and also very early to constantly work with keyboards. This CD is a compilation that features all the stuff they recorded before the release of their first album "Immense, Intense, Suspense" in 1994. Originally started in 1989 by Patrick van der Zee (bass), Tom Palms (guitar) and Lawrence Payne (drums) under the name BACTERIAL DISEASE, they changed their name soon to PHLEBOTOMIZED and became a quintet when vocalist Barry Schuyer and finally Jordy Middelbosch on second guitar joined the band. In 1992 they added Ben Quak as keyboarder, first as a session musician for demo recordings and then as a steady member. The demo recordings resulted in the release of the brilliant "Devoted To God" tape in 1992, featured on this CD as the first five tracks. Concerning the fact that those recordings were "only" made for a demo tape, the sound is excellent and very tight. And the music here is excellent as well, even though you hear that it is more 20 years old. But it has the typical early 1990s European Death Metal feeling, thanks to the deep grunting Death Metal vocals of Barry Schuyer, who left the band after the recordings presented on this CD. The style is pretty strange at the first listen and needs getting used to, but a blend of early MY DYING BRIDE, NOCTURNUS, THE DECOMPOSED and SINISTER (to describe it very roughly) can not be easy if you listen to it first. Given a few more run-throughs, the demo recordings are delicious and gourmand stuff. It is no wonder that 3000 copies of this demo were sold, thanks to a license deal with Polish label Carnage Records. Especially the first two tracks, ‘In Search Of Tranquility / Subtle Disbalanced Liquidity’ and ‘Desecration Of Alleged Christian History’ are great and complex songs who should be heard by open-hearted Death Metal devotees. Just for your collector’s interest: these two songs were also released as a vinyl 7" under the name "In Search Of Tranquility", limited to 3000 copies. But the other tracks are great as well. ‘Tragic Entanglement’ and the outro ‘Ataraxia’ were also used for the EP "Preach Eternal Gospels" in 1993, as well as two new tracks and the instrumental intro ‘In Memory Of Our Departured Ones (1914-1918)’. Originally intended as a second 7", the length of the songs prevented the release and so they were put out as a mini-CD with the aforementioned demo tracks. ‘Mustardgas’ is mostly slow and very doomy, even though the track has a few fast parts as well. The title track is a ten-minute epic of complex Death Metal with tons of breaks and a more gloomy atmosphere. This song also introduces the seventh band member, Maarten Post on violin, who, alike Ben Quak, was only a session member first, but became a steady member soon afterwards. He added his part to the avantgardistic style of PHLEBOTOMIZED. As bonus tracks we get three very raw live tracks (recorded in Rotterdam, Amsterdam and Hoorn in 1992 – 1993), that are quite interesting as well, since at least one of them seemed to be made with violinist Maarten and so the arrangements differ a little bit. As a special bonus, we get an early artwork of Necrolord himself, Mr. Kristian Wåhlin, which was also used for the original "Preach Eternal Gospels" EP. Gem hunters and roots diggers, proggies and savorers should check out: www.myspace.com/phlebotomized or www.vicrecords.com