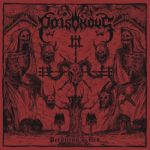 Sometimes I ask myself, why absolute gems pass me by for a long time. In the case of the up to now only album of POISONOUS from Brazil, I already found the answer. Since its first release in 2010 on the small Brazilian label Genocide Productions, “Perdition’s Den” was made available again a few times by other companies, but none of them was really a big one either. So it is no wonder that it took me seven years to listen to this album for the first time now, thanks to this new edition on Caverna Abismal. And I really missed something, since POISONOUS released a real highlight of Death Metal with “Perdition’s Den”. On the one hand, this album offers nothing new, or spectacular or extraordinary. But on the other hand, POISONOUS are brutally intense and their music comes from the rotten heart. The introducing riffs of ‘Subterranean Rules’ already show the way this album walks: a diversified mix of speeds from slow and crunching over grooving mid tempo to killing blastbeats, garnished with the vocals of a half dead corpse. While ‘Worthless Christ’ lives through the gloomy middle part, ‘Creeping Impurity’ and ‘Blasphemy Arises For The Knowledge’ are perfect examples for the South American school of Death. The title track ‘Perdition’s Den’ also has gloomy elements and finest crunching guitars. Speed freaks will love ‘Under The Blessing Of Death’ while connoisseurs of the diverse will prefer the final ‘Black Clouds And Fever’. But both of them are damn fine. These seven killer songs, together with two interludes, are so to say the core of “Perdition’s Den”, the bonus material differs from edition to edition. This new re-release features two of the three songs from the split album with DAEMONIC from 2014, "Death Apparitions Of The Damned Souls", only the SEPULTURA cover ‘The Curse / Bestial Devastation’ was left out. The two songs ‘Dead Beyond Death’ and ‘Extinction’ walk the same path than the songs of the original, it is just the production that is a little more clear. After these nearly 42 minutes there’s just one question left unanswered: when will there be a second POISONOUS album, that will vault this band into the centre of attention? Meanwhile you need to check: www.facebook.com/pages/poisonous/224351417597130 or www.cavernaabismal.com 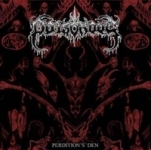 Sometimes when you think you’ve heard the best already, you run into something even better. Not long after Frank got my third "final" version of the 2010’s list this monster of a record appeared and once again the previous top 10 actually became obsolete (sorry, Frank)! For those who not know POISONOUS, they are the continuation of the defunct IMPETUOUS RAGE who released the intense "Inverted Redemption" three years ago. POISONOUS released the "Demo 2009" last year on the obscure Genocide Productions which featured some classy and dark Death Metal in the vein of HEADHUNTER DC, UNGODLY and IMPETUOUS RAGE. On this debut "Perdition’s Den" they continue in the same strong way with 10 songs (including two midtros) present a great majestic atmosphere that is spawned from the excellent riffing, very classy deep grunting, intense drumming and top notch songwriting. Due to the production "Perdition’s Den" reminded strongly of IMMOLATIONS’s classic debut "Dawn Of Possession" and POISONOUS are by no means copycats! Even though most tracks follow more or less the same pattern every single one of them is awesome old school Death Metal, so I guess that won’t be a problem then. The speed shifts within every track to serve the composition’s varity and many breaks sound so organic that the unaware ear could miss the matrue talent of these guys. The last track ‘Poisonous’ is from the demo 2009 which is cool, but why not put the entire demo as a bonus? Now we miss the SARCOFAGO cover ‘The Black Vomit’ which is too bad because the playing time of only 37 minutes felt like a bit of a let down. To wrap it up, this is food for all old school Death Metal veterans into HEADHUNTER DC, POSSESSED, IMMOLATION, MORTEM, SADISTIC INTENT, THE CHASM, CEMETERY URN, SCENT OF DEATH and the likes. Great band that you shouldn’t miss! Check for more info how to get this very cool debut and for soundsamples www.myspace.com/poisonousdeathmetal, www.genocide.com.br.