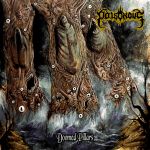 POISONOUS from the State of Bahia are one of the best names churned out by the Brazilian Death Metal scene in the last decade. Here we have their last effort, a self-financed digital EP containing four tracks of punishing old school Death Metal. POISONOUS are actually looking for a label interested in releasing this material on physical format. If you’re not familiar with these guys, they play a very solid and intense form of old school Death Metal. POISONOUS are not the typical Death Metal band coming from Brazil that just tries to imitate the brutal violence of KRISIUN. Here you get a very interesting mixture of old school American and Brazilian Death Metal: brutal, obscure, blasphemous and gloomy, everything with a rich and warm sound production. Unfortunately “Doomed Pillars” has a pretty short length: only 13 minutes. Some of the highest points you’ll get here are: the guttural vocals, the catchy and dark riffs, as well as an hammering and accurate drumming (blastbeats, D-Beats and double bass). The lyrical theme and the concept deal with blasphemy, satanism, occultism and darkness. POISONOUS are strongly influenced by the godfathers of the genre such as early IMMOLATION, MORBID ANGEL, CIANIDE, DEATH from “Scream Bloody Gore”, HEADHUNTER DC, SADISTIC INTENT, MORTEM, SARCOFAGO, SEPULTURA from “Morbid Visions / Bestial Devastation”, VITAL REMAINS etc. In conclusion, “Doomed Pillars” deserves a serious and professional release, because it’s a good example of blasphemous and morbid Death Metal anchored to the roots of the genre. For all additional POISONOUS information check out: www.facebook.com/profile.php?id=100062944253263, https://poisonousdeathmetal.bandcamp.com