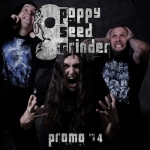 POPPY SEED GRINDER – honestly! A pretty strange name. Poppy seed is an oilseed obtained from the opium poppy and can be used as ingredients for many foods, like poppy seed rolls or poppy seed cake. Some kind of Botanic or Food Grindcore? Or is the band referring to the use of opium? There are names like CANNABIS CORPSE or BONGZILLA which hint at drugs. While writing this review I tried Google and damn, milling machinery especially designed for poppy seeds is called poppy seed grinder. What has that got to do with the band? I do not know. POPPY SEED GRINDER are active since 1997, quite along time. They released two full-lengths, three demos and a split album called "Talk Evolution / The Parasite" with DEFEATED SANITY from Germany. The untitled demo or promo features three songs within nearly ten minutes, no endless intros or movie samples. Some bands, especially Grindcore bands, are quite good when it comes to expand the playing time by adding samples and suchlike. But here you will find just ten minutes of Grindcore. Nothing unexceptional though, but well done. Somehow the three tracks remind me of NAPALM DEATH during the "Harmony Corruption" era, i.e. Grindcore with a strong Death Metal influence. Nothing more to write, still wondering about the band’s name. www.poppyseedgrinder.cz, www.facebook.com/poppyseedgrinder