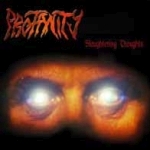 KILLER!!!! It seems that I missed out on quite a lot of excellent bands while VOICES FROM THE DARKSIDE was put on ice over the last couple of years. And PROFANITY (not to be mixed up with Swedish PROPHANITY) is one of them! This is already the second full length by this German three piece and it completely blew me away!! Judging the band by the featured eight own compositions on “Slaughtering Thoughts” they are already playing in the same league as all those established American Grind / Death Metal acts! You won’t even recognize their country of origin while listening to the first class material. Everything’s performed on a high musical level, extremely powerful produced and heavy as fuck! This is very extreme Death / Grind Metal in its most brutal form, delivered by a bunch of skilled and very dedicated guys that quite obviously don’t give a shit about the latest trends. So, in case your personal faves include American Death Metal in the vein of SUFFOCATION, CANNIBAL CORPSE, MONSTROSITY and the likes you should immediately get in touch with the label and order a copy straight away, otherwise you’re definitely missing a hell of an album! And I will have to check out their debut now. Cudgel Agency, Collegienstr. 21, 06886 Luth. Wittenberg, Germany, e-mail: office@cudgel.de