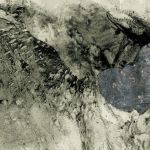 A strange phenomena occurred while I listened to “Matecznik”. The feeling of knowing this album for a long time, the feeling of a Déjà-vu, the feeling of listening to an album of a well-known band just without having the band’s name in mind. As you see, there is nothing new or surprising on the debut (no prior releases) by Polish based PROFECI. But from my point of view that is all right, no one (at least not me) is awaiting the next big thing or boundaries breaking soon-to-be classics. Musically the band presents some kind of atmospheric Black Metal with interspersed Death Metal riffs here and there. What makes the seven songs special, the trademark so to say, is the special sort of mid-tempo flow. There are faster parts, but the overall tempo slowed down, yet without being Doom Metal. Although the instruments are pretty low-tuned, which would perfectly fit to a Doom Metal band. Synthesizer or any other instruments than parts are completely missing only the typical guitar, bass guitar and drums are used. The vocals are characteristic Black Metal with some elements of clean singing. This mixture leads to an interesting result: music played with a relaxed attitude, avoiding the sheer aggression of other Black Metal bands. Instead the atmosphere is more, underlined by the down tuned instruments, solemn, majestic and splendid. More than once I thought of BEHEMOTH, of course due to the use of the Polish language but also because of the quality of the music. Definitely worth a listen for both Black and Death Metal fans, so visit www.facebook.com/profeci.band or the label’s homepage www.godzovwar.com to get an impression.