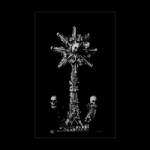 Kryth has become quite a known, evil-spirited individual for his evil-than-thou band involvements of recent times. Having not an exact number of all bands in my mind that he’s been involved with during his musical career of blasphemies, Satan worship and stuff like that, PURE EVIL is solely his own band in which he has given an artistic freedom to himself, to perform all instruments by himself. Much in my sheer amazement, Kryth has done a decent job by playing the instruments by himself, leaving obviously some of us to admire his skills for such a strong work on his 3rd album already, ominously titled as "As Blood Turns Black, Mankind Shall Drown In Despair". 5 out of 6 songs that have been featured for this slab, they all vary between from 5 to even 11 minutes in length, this telling its clear language about Kryth’s total dedication for his songwriting. Who says lengthy Black Metal songs cannot be done right because Kryth has just proved on "As Blood…" that it can be done – and with so much conviction involved in the making process of songs even. PURE EVIL’s Black Metal is either slow or mid tempo-ish, for the most part of it anyway – and he’s even pretty darn good at churning out those slower sections, especially whenever some of these slowly creeping and cold atmospheric moments come to appear within the song structures. PURE EVIL also clearly pays lotsa homage to some Scandinavian traditions stylistically as far as some certain characteristic nuances of the band’s grim sound is concerned. Gladly, there’s no keyboards involved in PURE EVIL’s old school Black Metal either; Kryth has managed to build up a thick enough soundscape around his Satanic manifestations on the record, just by using all his instruments very effectively indeed. Light the black candle now, take a knife to cut yourself deep and pour some blood at the altar of devil, in the name of Lucifer. Ave Satanas! Contact PURE EVIL at: www.hammer-of-hate.com