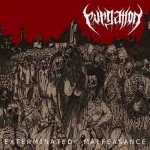 Finally again a band from India I really get into. PURGATION march into the battle under the banner of brutal old school Death Metal. These five Deathbangers from Kolkata seem to be die hard worshippers of the US scene (heavily influenced by the older savageries of SUFFOCATION, IMMOLATION, MALEVOLENT CREATION and other calibres of that breed). The outfit delivers six tunes (incl. an intro) which are quite in the same morbid vein and quality which some US gods unleashed in the past and we all are quite familiar with. The tracks are very well executed with an intense, down tuned guitar work and a slight technical edge. The drumming, with its sowing machine like blasts and relentless power, reminds me of the early works of SUFFOCATION while the vocal performance of Subhajit has a touch of IMMOLATION’s Ross Dolan. A healthy balance between devastating speed and crunching mid paced parts provides enough variety to avoid sounding monotonous. Of course the horde still isn’t on the same level or on par with their icons but you really can’t deny that PURGATION comes up with a real entertaining lethal slap of brutality and with a healthy portion of talent as well. These guys made their homework that’s for sure! The little bassy, slight muddy but heavy production supports the band’s aggression and intensity in a perfect way I think. There’s some room for improvement in that department but it is well done for a debut and I really enjoy the way how "Exterminated Mafeasance" turned out as everything flows on this EP and complements one another. A good start for this Indian five piece Death Metal commando and I am already curious about their furture outbursts. Great job and I can just recommend you to give them a try! All interested Death lunatics should check out the band’s site at www.facebook.com/purgation or their label at www.facebook.com/slaughterhouserex.