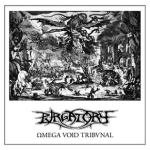 I always liked PURGATORY, which is by the way one of the oldest still active German Death Metal hordes. They always stood true to their roots and never bowed to any trend or Death Metal hipster fashions. This unholy force from the eastern part of Germany never released anything weak. So I was really looking forward for the new album, especially because the predecessor “Deathkvlt” was an extraordinary good release. And now, three years later, here it is: “Omega Void Tribvnal”: the band’s eighth full-length and in my humble opinion PURGATORY’s best release so far. This is pure fuckin’ Death Metal and nothing else. This masterpiece is brutal like hell, it’s dark, it’s grim, it’s aggressive, it’s atmospheric, it has gloomy melodies and it contains eight outstanding songs. The band perfectly understands how to get to the point and how to compose ass kicking songs. The songs are simply superb, very varied, catchy, enthralling, brutal and engrossing and there is absolutely no filler on this album; each song is splendid and addictive. “Omega Void Tribvnal” is close to perfection…. There is unquestionably nothing to complain about. The musical skills are blameless, the vocals are varied, utterly brutal and ferocious, the drumming is tremendous, precise and powerful, the guitars simply kick ass and the sound is vigorous, brutal and sinister and every instrument is clearly identifiable. Mr Engel did a very good job with the production of this album. PURGATORY did not reinvent the Death Metal wheel, they just brought everything onto a higher level. I also love the artwork; the band used an old etching by Jaques Callot called “The Temptation Of St. Anthony”, which perfectly fits to the atmosphere of the album. To sum it up: “Omega Void Tribvnal” is PURGATORY’s magnus opus (…so far) and simply one of the best Death Metal releases I’ve heard through the last couple of years. No more no less! By the way, PURGATORY also always delivers brilliant, passionate and intense stage shows so if they will play in your town, don’t miss them and now stop reading and buy “Omega Void Tribvnal”!!! www.purgatory666.de, www.facebook.com/purgatory666, www.war-anthem.de