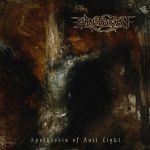 Close to 30 years of creating pure Death Metal, this is the ninth album from this German squadron of darkness. The name of the game is pure evil Death Metal with subtle touches of Black Metal, not far away from early MORBID ANGEL, maybe with added Scandinavian touches, and why not, some American sound from the elders and old school bands that mostly end their names with ATION… yeah those same that you have on your mind. Now, in this case, the band has made quite a few changes in their discography. No, they are not becoming more technical in their music, but yes, they now have mastered their instruments like only time shall tell, and without doubt they are the legion that goes onward to Golgotha. The drumming is quite impressive as it is so massive in a style that reminds me more of the so called War Metal bands but without being one. Yes, at times some songs sound a bit like some others, and yes their discography have many things similar. But when a band is able to conjure such killer hymns as ‘Ropes In November (Samhain’s Curse Part III)’, which would make AUTOPSY proud, you know you are listening to some well versed veterans in crafting Death Metal as the book of souls mandates. The vocals have a good range of variety, changing from lower growls to some more high pitched screams here and there. A heavy yet powerful production makes this package complete. Again this is a band I have more than a couple of releases of in my collection and they are all of similar quality. Besides the fact that they deal with what true Death Metal is, darkness, death, horror and satanism, the dark atmosphere the band evokes is just what fans of real evil fast and grotesque Death Metal need. www.facebook.com/purgatory666, www.facebook.com/waranthemrecords