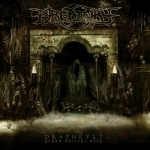 Seventh long player by Saxonian Death Metal warmachine PURGATORY, one of the oldest still existing, no compromise Metal of Death acts from Germany. All of you who are familar with their previous releases, especially the highly acclaimed “Luciferianism” album from 2004, know that this four piece stick to their guns and never change their formula when it comes to their style. It’s unnecessary to slam this band with comparisons, expect nothing more than their interpretation of an European and US styled Death Metal cocktail based on ripping speed, heaviness and aggression instead of ending up in a technical overkill. Personally I think that the production of “Deathkvlt” (Rape Of Harmonies Studios) is a lot more intense and punching compared to their 2011 album “Necromantaeon”. It truely delivers the sound spirit of some classical VADER or VITAL REMAINS recordings. Musically to me PURGATORY really grow stronger when they get into the more heavy sounding mood by adding slower elements, that sound nothing more than mighty as hell. Furthermore I think that the vocals of frontbeast “Dreier” (ex – SEIRIM) improved a lot on this recording. Especially the deep growls know how to impress. Artworkwise “Deathkvult” stands in the tradition of the forerunner releases and it fits the dark approach of the music in an occult manner. The vinyl layout slightly differs from the CD vervion, but most of all the vinyl and the limited CD digipak version come along with a well executed cover of DEMIGOD’s mighty ‘As I Behold I Despise’. PURGATORY even recruit DEMIGOD’s vocalist Esa Linden for a guest contribution. Good choice!!! Take it or leave it – PURGARORY deserve your respect for being a totally true and dedicated underground Death Metal act in all aspects! Never change a running system!!! Support the “Deathkvlt!!!! www.purgatory666.de, www.war-anthem.de