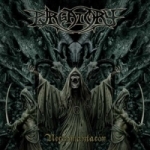 Our dear friends of War Anthem Records take the slogan “support your local underground” quite serious these days and developed a real fetish for the few survivors of Germany’s former Death Metal underground. Only some weeks after the latest POSTMORTEM manifest they are offering another cult act the return from the shadowlands. I still recall the first PURGATORY EPs – via their former house label Perverted Taste – with the ‘impressing’ SM cover artworks (and I have to admit that in these days I’ve afforded them with a mixture of musical and other fundamental interest but before blaming me remember the time when you had been young and innocent). Over 15 years have past since these glorious days and with “Necromantaeon” the band is already presenting their sixth full release. I never lost the touch to these sickos from Nossen / Saxony, but even if every album offered a handful of solid tracks they never recorded a completely convincing release. Unfortunately this stigma hasn’t disappeared over the years! Their latest release “Necromantaeon” is without a doubt an album full of hatred and musical aggression and also some great tracks like the NECROPHOBIC influenced ‘Glorification Of The Lightbearer’ or the final song ‘The Collapse Of Tides’. But – even with a minimalistic playing time of hardly more than 30 minutes – the similarity of certain tracks is still the major problem. If you need 100% aggression and the feeling that a German tank just visited your apartment you will love the latest PURGATORY assault, but compared with other local and international combos the really essential material is again missing. Nevertheless a solid release but unfortunately not the desired big step toward, for further info pleases check: www.war-anthem.de, www.purgatory666.de