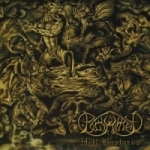 This piece of green vinyl is already some years old but never the less – quality is what matters so it got reviewed. It was released in 2003 by the German underground zine and label German Underground Crossection (www.guc-area.de) and features the East-German Death Metal bands PURGATORY(www.purgatory666.de) and POLYMORPH (www.polymorph666.de). On the PURGATORY side you will find three songs, which were originally intended to be released with the German band CHARON but since administrative problems this was cancelled. Two well done cover versions, one from AUTOPSY (‘Fiend For Blood’), which got a big influence on PURGATORY on their first recordings and the almighty TERRORIZER (‘Corporation Pull-in’). Both songs were relicts from the recording-session for the "Blessed With Flames Of Hate" album back in 2000. The third one is a live version of ‘Captured Souls’, recorded also in 2000 at an open-air festival in Purgatory’s hometown Nossen. POLYMORPH perform two studio tracks, which were recorded in 2002. They play fast Death Metal with sick vocals… so if you like their 10"-partners you will enjoy it. The sound on both sides of this 10" is raw and brutal, which does NOT mean that it is bad and poor and lo-fi or something. It is exactly the sound how this kind of Death Metal should sound like. So if you are a fan of either PURGATORY or POLYMORPH you already got this and if not – buy it and support the underground. And of course enjoy brutal Death Metal!