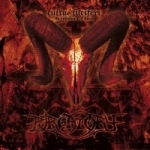 After four years and some line up changes PURGATORY return with the follow up to “Luciferianism” which was released in 2004. Considering that the band is around for 16 years already and gained a reputation as a powerful live act, PURGATORY should be known to most readers, if not all Death Metal maniacs. The band still follows its formula of thick and rather well-composed Death Metal bearing influences of both American as well as European sound, tending towards the underground bands of the early to mid nineties. The “eastern” influences referred to in the info can surely be pinpointed to VADER – no need to beat around the bush! It is quite interesting to see how a band which was very clearly influenced by old MORBID ANGEL and SLAYER serves at least partially as an inspiration for another band. Actually the fast drum passages as well as several vocal patterns bear quite a bit of similarity to the period when the Polish band moved away from the sound of their debut, especially “Black To The Blind”. Despite the audible similarities PURGATORY are not that one dimensional, as already said their composition have a definite European note in terms of songwriting and riffing. Luckily, the vocals of the new throat Dreier who replaced the vicious Sick who was with the band from the early days on sound FAR more deathly, varied and convincing compared to the delivery of a certain Polish vocalist. Dwelling on the vocals, there are several collaborations worth mentioning on “Cultus Luciferi” as Oeilalla / DARKENED NOCTURN SLAUGHTERCULT, Wannes Gubbels / PENTACLE and some others (as the vocalist of MORGOTH on the very well-done cover of ‘Pits Of Utumno’ – let’s just keep our fingers crossed that band never reforms!) can be heard an different songs which certainly adds to the variety. “Cultus Luciferi” does not exactly tread new ground but is a very competent and honest effort of intense and dynamic Death Metal. Concerning the production, all intruments are clearly present in the mix while still retaining a pleasant rawness. The guitars could use a bit more punch to make this album even more crushing but that may be my age… and there is still the possibility to turn up the volume! If you followed the development of PURGATORY over the years and grew to be a fan then this is definitely an essential purchase as “Cultus Luciferi” is without doubt their most intense offering so far. One might say that PURGATORY have even surpassed their idols with this offering. www.purgatory666.de, www.animate-records.com