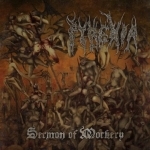 PYREXIA from New York is another technical Death Metal outfit, that unfortunately perished in the mass of releases back in the 90s, even though their debut release "Sermon Of Mockery" was quite a good album. After two released demos, the band finally got signed to mighty Drowned Productions, who had some really good bands back then, but naturally were limited in the support and advertising. Surely even back in 1993, the band had not invented anything new and showed themselves obviously influenced by bands like SUFFOCATION or even older CANNIBAL CORPSE. Their brutal and technical Death Metal comes up with proper and technical drumming, with precise and pounding double-bass and snare and high-hat attacks. Similarities to above mentioned influences come up in form of the grunted vocal style, changes in speed and the mass of breaks. Fortunately I have not listened to the material for about twenty years now, so nowadays the material sounds fresh and unused again. The technical guitars deliver a similar quality like the old SUFFOCATION releases and this seems to be the work of guitarist Guy Marchais, who played in SUFFOCATION before PYREXIA and later again in SUFFOCATION. Surely some real hits are missing in the quality of SUFFOCATION or CANNIBAL CORPSE, but the material is really fine and complex and the mixture between the technical drums, fine technical guitars, with powerful chords and solos and the deep grunts are really enjoyable, even twenty-two years after its original release. Century Media saw the quality of the material and finally makes this output available again on CD and vinyl format. Also as bonus, they have added the four songs of the band’s 1992 demo "Liturgy Of Impurity", with proper sound quality as well, from which only three songs have finally been used for their debut "Sermon Of Mockery". And as this was not enough value for money, the band’s 1995 three track EP "Hatredangeranddisgust" was added to this re-release as well, which was limited to two pressings of only thousand copies each back then. These three tracks of the EP show the band also in a really good shape, as the tempo has been increased, the guitars are more brutal and the grunted vocals have been complemented with some brutal screams. Fans of brutal technical Death Metal like the above mentioned bands, should give this re-release a listen. Also collectors of 90s releases, who missed the original copies, really get value for money with this fine packed releases in several formats. Check the band out via: www.facebook.com/pyrexiadeathmetal, CD and vinyl copies are available directly via www.cmdistro.com in the US and Europe.