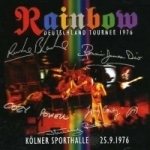 A RAINBOW review in VOICES? Yeah, because I am the law… and apart from that the early days of this band still kick major ass, so stop complaining folks! 30 years ago, Ritchie Blackmore’s RAINBOW played their first ever world tour and impressed the audiences with blistering performances each night. To celebrate this anniversary there’s a couple of releases out these days, that have been recorded live in Germany on that particular tour and that diehard fans of the band definitely shouldn’t miss out on! So far "Live In Cologne 1976" and "Live In Munich 1977" have turned into reality, but according to the liner notes the Düsseldorf und Nürnberg shows are supposed to follow soon as well. "Live In Cologne 1976" was recorded at the "Sporthalle on September 25, 1976, while the "Live In Munich 1977" release is from the band’s performance about a year later at the Olympiahalle on October 20, 1977. The setlist on both double CD sets is almost identical with 1977’s "On Stage" album, which means the band kicks off with the crushing powerhouse ‘Kill The King’ and then performs alltime classics such as ‘Sixteenth Century Greensleeves’, ‘Catch The Rainbow’, ‘Man On The Silver Mountain’ as well as the old DEEP PURPLE classic ‘Mistreated’ and the Samwell-Smith / McCarty tune ‘Still I’m Sad’ (with a different running order though). There’s 8 songs on both releases, partly with individually incredibly lengthy versions (‘Still I’m Sad’ on the Munich release for example is approximately 25 minutes long!!). 3 of the tracks from Cologne (‘Sixteenth Century Greensleeves’, ‘Stargazer’ and ‘Still I’m Sad’) and 3 from Munich (‘Kill The King’, ‘Mistreated’ and ‘Do You Close Your Eyes’) have previously already been released on the "Live In Germany 1976" compilation double CD set from 1990, but this is the first time you’re getting each show in its entirety. The setlist only differs very little from each other (‘Long Live Rock’n’Roll’ replaced ‘Stargazer’ in Munich and ‘Lady Starstruck’ ended up as part of ‘Man Of The Silver Mountain’). As you will most certainly know, the core of the band’s line-up at the time consisted of Ronnie James Dio on vocals, Ritchie Blackmore on guitars and Cozy Powell on drums, while in Cologne Jimmy Bain and Tony Carey and in Munich Dave Stone and Bob Daisley completed the picture on bass and keyboards respectively. I personally can’t say that I prefer one line-up over the other as both used to deliver tremendous performances. But I still like the Munich show a little bit more, especially because of the amazing version of ‘Still I’m Sad’ (which perfectly showcases Ritchie’s love for classical music in terms of an incorparated Beethoven section and Cozy’s amazing drum solo that also gets accompanied by classical music). Too bad that the amazing ‘Stargazer’ is missing here… You can also buy the Munich show on DVD now. For more info check out www.afm-records.de or www.eagle-rock.com.