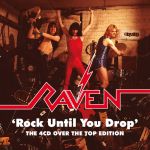 RAVEN
Rock Until You Drop: The 4 CD Over The Top Edition
(Hear No Evil Recordings / Cherry Red Records)
268:31min