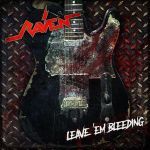 No, “Leave ‘Em Bleeding” is not a new album from the NWOBHM legend RAVEN. It also isn’t a recent live recording. This album is a compilation, a kind of a “best of” from the last few years. The first three songs, ‘Top Of The Mountain’, ‘Metal City’ and ‘The Power’ are from the brilliant 2020 album “Metal City”. Three more tunes, ‘Destroy All Monsters’, ‘Battle March / Tank Treads’ and ‘Malice In Geordieland’ were featured on the RAVEN album “ExtermiNation” in 2015, the latter as a bonus track. And the live version of the classic ‘Crash Bang Wallop’ was taken from 2019’s live album “Screaming Murder Death From Above”. ‘Space Station # 5’ is a MONTROSE cover tune that was on “Walk Through Fire”, the album that marked the comeback of RAVEN after a longer break in 2010. And ‘Necessary Evil’ was also featured on most versions of that album. So, these songs are far from being rare recordings. The final three songs on “Leave ‘Em Bleeding” are a little more hard to find: ‘Bad Reputation’, a quite likeable THIN LIZZY cover, can be found on the rare “Party Killers” EP. Another quite nice rare song is ‘Rock This Town’, which only appeared on the Japanese version of “Metal City”. Finally we have a good live version of ‘Stay Hard’ that was recorded in Tulsa in 2017 and was unreleased before. So there’s exactly one song that’s worth getting this compilation for a die-hard RAVEN lunatic and up to four songs of interest to those who own all the albums they did in the new millennium. Not too many good reasons to get “Leave ‘Em Bleeding” unless you haven’t heard them yet. And even in that case I’d advise anyone to check out the first three RAVEN albums. In sum, “Leave ‘Em Bleeding” is a pretty redundant compilation. Just in case, visit www.facebook.com/ravenbandofficial or www.facebook.com/spvsteamhammer