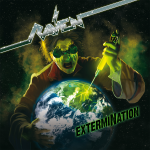 It feels like they released their last album "Walk Through Fire" yesterday, but the truth is it’s already been five years! "ExtermiNation" is RAVEN’s album # 13 (not counting live albums, compilations, singles and so on), and includes 15 new songs. And guess what: we won’t find anything new here. We all heard it before. And thank you for that, Metal gods! Thank you for bands like RAVEN, who have the balls to go on, who have balls to show the middle finger to trends and similar diseases! It’s no secret that RAVEN are one of the best traditional Metal live bands, and – only the devil knows how – they managed to capture this amazing energy that made them famous on this record. Hard to say if they drink energy drinks mixed with coffee all day long, or if music is their drug that boils the blood in their veins, but fans who saw them live will confirm, that their energy is not from this world. And yeah, we have this energy here, between insane vocals, great riffs, and great songs! if you haven’t heard or don’t know RAVEN you probably aren’t into traditional / Heavy Metal that much, and if you know them: they did it again, they did another great album! All hail RAVEN, they are here to ‘Fight’ and to ‘Destroy All Monsters’, so let’s join their ‘Battle March’! More information: www.ravenlunatics.com and www.spv.de