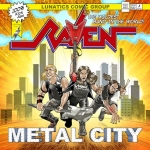 In the history of British Rock music, there are two famous pairs of brothers with the last name Gallagher. Quite well known are the jerks Noel and Liam, who gave Brit Pop a bad name for being wacky idiots. And then there are the good ones: Mark and John Gallagher from Newcastle-Upon-Tyne, better known as RAVEN, together with a their respective drummer. It’s more than 45 years ago that these two brothers were teenagers and started their band. When the “dam began to burst” and the New Wave Of British Heavy Metal started rolling, the Gallagher brothers alongside drummer Rob ‘Wacko’ Hunter were there and released three albums and some singles on the legendary label Neat Records. Those three albums, “Rock Until You Drop” (1981), “Wiped Out” (1982) and “All For One” (1983), are now seen as absolute Metal classics, nearly 40 years after their release. And with great justice, of course. The slightly chaotic high energy Metal on the border to Speed Metal made RAVEN an insiders’ tip for the next big thing in Metal. The USA seemed to be waiting for them, especially after their successful American East Coast tour, supported by the hopefuls METALLICA (anyone remember them?). But history shows us it didn’t work. Two albums for Atlantic with a much more commercial sound, more or less coerced by the label, ruined the reputation of RAVEN in the Metal scene. And they weren’t their big breakthrough either. But the Gallagher brothers didn’t give up, hired Joe Hasselvander as the new drummer for the next thirty years of their career and released a lot of albums since then. And these albums might not be as great as their juvenile output of the early 1980s, but they delivered quality Heavy Metal on a constant level. Why do I tell you all this? Well, it’s 2020 and RAVEN is back with a new album. “Metal City” delivers their first new songs in 5 years and the first with their new drummer Mike Heller, who replaced the ailing Joe Hasselvander. This guy, about twenty years younger than the Gallaghers, is a real kick in the ass for RAVEN, as “Metal City” shows the band at their best for at least 30 years! The dynamic drumming of Mike Heller seems to be a rejuvenation for Mark and John as well, and the production of “Metal City” is crunchy and heavy, adding up more power. But of course it needs more to make a fine Heavy Metal album: great songs! And “Metal City” has plenty of them. The first seconds of the opener ‘The Power’ already show the fresh power of RAVEN. An up-speed track with a killing drive that has the spirit and the energy of their early days, including a fine solo battle of Mark’s guitar and John’s bass. It’s hard to start an old school Metal album in a better way. ‘Top Of The Mountain’ is as infectious, close to Speed Metal and a guaranteed headbanger. And ‘Human Race’ is no relaxation for the neck muscles, even though the middle part slows down and offers guitar harmonies in best MAIDEN style. After this neck breaking opening triple, the title track slows down the speed, but not the power. ‘Metal City’ is the song that RAVEN should have done in their mid 1980s “Atlantic Years”, as the killer refrain definitely has its 1980s style chart breaking qualities. Would have been a hit in 1985 for sure without chuming up with the mainstream. It’s a difference whether your record company wants you to write a chartbreaker or if you want to do it on your own! The following ‘Battlescarred’ is also more slow paced overall and refers to the catchy and anthemic songs of the early days of RAVEN. A song to raise your fists to! With ‘Cybertron’, we have a song on “Metal City” that sounds a little more modern, due to the topic it deals with, yet it is still old fashioned enough and has a real heavy punch. And what does the old fashioned Metalhead expect from a song that is titled ‘Motorheadin’? Probably the same thing that you get: a full speed attack that takes a great nod to Lemmy. Just listen to the drum intro. Mikkey Dee couldn’t have done it better! As if one catching sing-along tune of the album wouldn’t have been enough, RAVEN recorded ‘Not So Easy’, another fine potential earworm with class. With ‘Break’ the Gallagher brothers tried to restore the chaotic spirit of their youth, an endeavour that mainly succeeds as the sheer power of the song really crushes the slight flaws of the composition. In the end, the slow and even a little epic ‘When Worlds Collide’ gives the listener finally a chance to relax the neck muscles a bit while still enjoying the power of this album. And, in my case, to really understand that RAVEN are more alive than ever. Honestly, I haven’t expected this album to be such a great one, the best RAVEN did in aeons! Even the artwork is a fine piece of art, as the comic style of the cover is carried on in the booklet as well. I just hope that us vinyl lovers will get that extra too. So after this furious return to old strength, there’s just one way for RAVEN to put the cherry on the cake: an extensive tour, devastating the clubs of Europe, preferably in the company of ANVIL, their brothers in spirit. What a fine meeting of old geezers that would be… Until then, visit RAVEN at www.facebook.com/ravenbandofficial and their company at www.spv.de