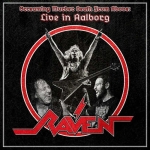 Here we have the latest effort from the NWOBHM legend RAVEN: a live album recorded in Denmark in late November 2017. This is the third live album in their 45-year career and it has been recently released by Steamhammer / SPV on the following formats: CD digipak, double LP gatefold and digital download. The tracklist is a perfect mixture of some of their most recent songs and a bunch of classic ones. The sound is perfect and powerful with all the instruments perfectly audible and the crowd too. Another thing to notice is that this gig sounds very natural and with some imperfections here and there, without many post-production readjustments in the studio. The line-up nowadays consists of brothers John (bass and vocals) and Mark Gallagher (guitar) along with Mike Heller (drums). Mike joined the band in 2018, when RAVEN’s long-standing drummer Joe Hasselvander suffered a heart attack, putting an end to his music career. Heller is a well known name in the scene, due to his very talented and technical drumming with FEAR FACTORY and MALIGNANCY. What else to say? All the songs are perfectly played and are faster than on the original recordings. So if you’re into classic British Heavy Metal and old school Speed Metal, "Screaming Murder Death From Above: Live In Aalborg" is for sure a worth buying, because you’ll get an exceptional live performance from a band active since 1974. Long live RAVEN! More info at: www.facebook.com/ravenbandofficial, www.spv.de