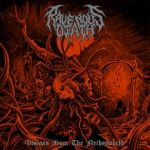 Mexico has a great history of brutal and smashing Death Metal, going from internationally known names as THE CHASM and SHUB NIGGURATH in the early 90s, continuing with a big splash in the late 90s / early 00s with DOMAIN / RAVAGER, HACAVITZ, DEMONIZED and NECROCCULTTUS and the scene has since continued to spawn brutality. RAVENOUS DEATH is among the new generation of Death Metal madness from Mexico. Formed in 2016 and now ready with the second full length attack on Memento Mori from Spain. The band took the band name after a song by the Swedish Death Metal machine VOMITORY featured on their 2009 album “Carnage Euphoria”. There are some hints to crunching Swedish Death Metal of the brutal kind, more present on the debut EP “Omnious Deathcult” and the first album “Chapters Of An Evil Transition” than today. Though the fat and grinding guitar sound can easily be mistaken for a Swedish assault and the organic and pounding bass drum sound does also have a scent of the Sunlight Studio sound from the good old days. Though RAVENOUS DEATH is much more brutal and chaotic in its presence today. Violent Death Metal attacking you like a ten ton hammer with the thick walls of guitars, ripping leads and the punishing drumming and pounding bass lines. On top of that the scorching vocals, brutal, evil and raw! “Visions From The Netherworld” is a nice Death Metal blast with some sheer power and aggression, straight forward pieces, nice disharmonic madness and chaos at times, chaotic brutality and thick fitting slightly raw and chaotic production, which fits this output perfectly. I’m a fan! Enter the portal to nowhere: www.facebook.com/ravenousdeathofficial, www.facebook.com/memento.mori.label