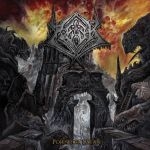 REEK was formed in Sweden in the year 2019. They debuted with an album back in 2020. They have members and ex – members of well known bands such as CURSE OF EIBON, WOMBBATH, IN THY DREAMS, RIBSPREADER and others. So what could you expect? A heavy dose of NWOSDM worship, right? Well that is exactly what “Porn For Satan”, REEK’s sophomore album, offers. With Rogga Johansson handling the guitars, one could easily say that the band may be similar to any of his other bands. Well, luckily, it isn’t. Besides powerhouse drummer Jon Skare, he is joined by multi-instrumentalists Mathias Black (bass) and Håkan Stuvemark (guitars, vocals). So, the songs found in this album have a bunch of other influences. Yes, the band is deeply rooted in the early 90s NWOSDM, but it also proves that you can still have a different approach to a style of music that has been done ad nauseam. The nuances are plenty and the album flows nicely from start to finish. It sounds “close to home”, so to speak, but has enough variations for me to keep listening. Twisted parts, lots of D-Beat rhythms with full speed outbursts and even some really groovy parts that reminded me of their fellow countrymen, DEATH BREATH. Recorded and mastered by their own Håkan Stuvemark and mixed by none other than Thomas Skogsberg at Sunlight Studio, the production on this album is simply top notch. Huge drums, pounding bass, thick HM2 guitar tone and mid-pitched growling vocals come together to punish the listener for a little less than 40 minutes. This is a solid Death Metal album with an amazing production and excellent all around musicians. Recommended for crazy fans of NWOSDM and Death Metal in general! More REEK info at: www.facebook.com/reek-sweden-104611050916938, label contact: www.facebook.com/ibdc666

Related reviews / interviews:
• REEK - Death Is Something There Between (Michael Kujawska)
Back Report errors Print