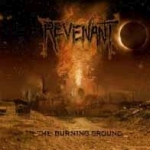 I like that!! I spent quite a lot of money the last months ordering these CDs with old demos, 7″ EPs and live-recordings on it, great releases like the Sinoath CD “Forged In Blood”, Gorements “Darkness Of The Dead”, Excruciate’s “Beyond The Circle” among others. It brings back great memories and therefore I really adore this CD released from Xtreem Music! So what do we find here? As I said, this CD is no new recording from Revenant, a band that already exists since early ’86. Many of you will know them by their great “Prophecies Of A Dying World” LP released through Nuclear Blast in 1991 and for sure the tapetraders among us know them by their cool demos (especially “Asphyxiated Time”) and their 7″ EP with the 2 songs ‘Distant Eyes’ and ‘Degeneration’. Songs like ‘Distant Eyes’, ‘Degeneration’ or ‘Asphyxiated Time’ will never get boring and it’s great to see that they didn’t loose their originality during the years. Revenant were and are still not comparable to any other band in the Thrash (or Death) Metal scene. What you are going to find here are 14 remastered songs (including one live track ‘The Unearthly’ from their tour with Gorefest in Den Bosch, NL in ’91) from older recordings like their 7″ EP and a couple of their old demo tapes. I know that the plan of recordings like this is not to sell a lot of records, this is a CD from fans for fans. And to all fans of the Death Metal underground and the tape trading scene of the early 90s I can recommend this recording to all of you. Get back the good memories from this time and support a band which was during their whole existence original and not comparable to any other Death / Thrash bands around. For all the people who don’t know Revenant so far I’d suggest to search for their debut album “Prophecies Of A Dying World” to discover how great this band was! I’m looking forward to a new official release from them. Take a look on www.revenant.ws and www.xtreemmusic.com.