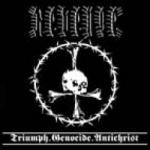 I really anticipated this release, because Pete Helmkamp (ex-ANGEL CORPSE / ex-ORDER FROM CHAOS) has joined this project of James Read, who also plays in CONQUEROR and AXIS OF ADVANCE. I had hoped for Pete’s return on vocals, because his voice was one of the few unique and characteristic in the scene, but when I listened to REVENGE’s debut on Osmose I was slightly disappointed at first, because the intense and raw screams, that we know from Helmkamp’s other bands only appear scarcely on “Triumph. Genocide. Antichrist”. Anyway, this doesn’t mean that the album isn’t good, but it is not what I had expected. REVENGE create an apocalyptic, hateful and merciless sonic assault, that should satisfy anyone, who digs BLACK WITCHERY, IBEX THRONE or SADISTIK EXEKUTION, anything that is brutal, fast and totally possessed. This is definitely stuff for maniacs, but anyone who enjoys a torturous treatment of his ear drums should check out violent orgies like ‘Heathen Hammer’ (my favourite on this CD), ‘Blood Division’ (with a cool Crust / Punk riff at the beginning) or ‘Altar Of Triumph’ and I promise you will be pretty happy with this release. www.osmoseproductions.com