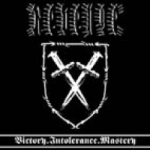 I suppose I have to keep my mouth open wide in awe before this sophomore release of this self proclaimed "cult" band involving such universally respected artists as James Read (CONQUEROR, BLASPHEMY, AXIS OF ADVANCE) and Pete Helmkamp (ORDER FROM CHAOS, ANGELCORPSE). I am sorry but I can’t endorse this farce though. In the eternal quest of extreme brutality, some people forget they are musicians first and foremost, and that they have to offer songs to their public. You can be noisy all right, no problem with that, but bands like BEHERIT, SARCOFAGO, BLASPHEMY were able to actually sculpt noise to come out with memorable tracks with recognizable riffs. Here the listener is confronted with nothing else than a wall of white noise lacerated by insane vocals courtesy of Helmkamp (these being the one and only strong point of an otherwise catastrophic offering). The advantage of this CD resides in its duration; the pain inflicted becomes less annoying. Believe me, this record is a complete waste of time, I crown this the worst offering for 2004. And since the artists involved proudly claim they don’t give a fuck about what reviewers could say (so, why even do the promotion of the disc in the first place, uh?), I suppose they will not be offended by my opinion. If you are a fan of the pitiful CONQUEROR, you may dig REVENGE a lot. If not, stay away from this and invest your money in other cool Osmose releases, like "Nuctemeron Descent" (ABOMINATOR) and "Obey" (AXIS OF ADVANCE). My idea to re-title this album: "Defeat.Arrogance.Vanity".