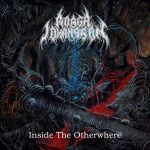 Swedish Death Metal statesman Roger “Rogga” Johansson has cranked out some excellent music for the past twenty years and it is only fitting that his new solo effort in about three years has been completed carrying the saga of its predecessor “Entrance To The Otherwhere”. For those who are not familiar with Rogga, he is / has been involved with several Death Metal bands such as BONE GNAWER, RIBSPREADER, FURNACE, PAGANIZER and who can forget his work in JOHANSSON & SPECKMANN with the Death Metal underground legend Paul Speckmann. Let’s see what we can find in “Inside The Outerwhere”. The title track of the album kicks things off with an instrumental yet relaxing majestic bliss. ‘Another World Darkly’ has a guitar hook that hints at CEMETARY era “Godless Beauty” and a very catchy melody. It really brings out the band in top shape spewing forth some old school Swedish Death Metal. ‘The Creepers Are Coming’ and ‘The Dance Of Garpedans’ are both solid tracks with excellent guitar melody and drum accents. A big DISMEMBER feel on those two tracks, especially when the guitars kick in at the start. Things took a minor detour with ‘Nowhere Else But Here’ as this song felt like a filler song with some lackluster arrangements that felt out of place. The production overall on this album is very crisp and clean where each instrument stands on its own and the vocals don’t drown out the music (and vice versa). Shout out to Brynjar Helgetun for once again mixing / mastering a solid record. Rounding out the album are ‘Ends And Beginnings’ and ‘The Key Found’. Both are solid Death Metal tracks with some outstanding drumming. Rogga continues to create some excellent tunes and I do not see him slowing down any time soon. This has turned out to be a good follow-up to “Entrance To The Otherwhere” and overall you know you are getting some solid music whenever you see Rogga involved with the music. The guy literally has a grocery list of bands he has worked with for over 20 years and know what you are getting. This was a fun album to check out and I would highly recommend (especially if you are familiar with Rogga’s other works) to anyone and for those of you new to Rogga’s work… start getting a playlist going of all his material, especially RIBSPREADER. Cheers! For more info: www.facebook.com/roggaofficial, www.facebook.com/ibdc666