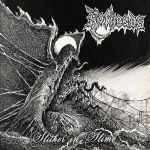 “Slither In Slime” is the second ROTHEADS album, after their debut full-length “Sewer Fiends” (2018). And it can be said that these four Death Metallers from the Romanian capital are now ready to set their footing deep into the stinking morass of the underground. Originally brought to life as an old school Death Metal side project by experimental band KEENG RA’AT, the transitions of ROTHEADS are deliberately set to drag anyone off into the vastness of foggy swamp landscapes with their horrid sound. The stylistic influences are unmistakably based on the early nineties of the extreme Death Doom camp, which swung between Swedish and Finnish schools. This will be reminded heavily while listening to tracks like ‘Lost In The Cemetery Gardens’, ‘Gut Mauled’, ‘Skin Forest’ and ‘Dragged Through Existence’, where song structures are forged by tempting D-beats and ethereal Doom elements. The invoking solos do their own thing in each composition, but the slimy Romanians also know how to remain balanced throughout and take their foot off the pedal at the right times, in classic Doom manner. This means no blast beat hurricanes, but you won’t miss breakneck wrecking ball like sound in this kind of Death Doom Metal. The slimy production is meant to keep heads possessed and amazingly ROTHEADS always remains on the edge to make you remember many transitions and movements throughout the album length. This second release has that certain something, which makes “Slither In Slime” almost three-quarters of an hour of intense listening fun. “Slither In Slime” was mastered by Ted Tringo (AUTUMN TEARS) and features cover artwork by Raul “Mörtuus” Fuentes (RAVENOUS DEATH) and is now available to get many more spins. Find out more about the band and label at: www.facebook.com/rotheads, www.facebook.com/memento.mori.label