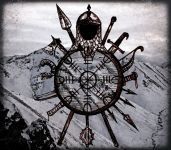 From the icy and rugged far north of Alaska, RÜBEZAHL brood their debut album “Remnants Of Grief And Glory”. The name, RÜBEZAHL, refers to “Lord of the Mountains” and the story goes back to pagan heritages. Ruebezahl legends come out of the Riesengebirge “The Giant Mountains” – a mountain range between Silesia and Bohemia. Although this folkloric mountain spirit is described as a giant guardian of the meager mountain people and perceived as a monk like figure in grey robes. However, fascinatingly enough, Ruebezhal is actually regarded as a “Woodwose”… a native spirit of the mountains and forest who is not really a demon or god, just a giant prankster and shape shifter! Upholding that in the band name and released titles, the music of RÜBEZAHL also give a shape-shifting essence, sonically and atmospherically. With both imagination and authority, this three-piece effectively produced that sound; which feels ancient, ferocious and ice-cold – as heathenistic Pagan Black Metal should be. As soon as the record begins, numbers like ‘Voyage’, ‘Meditations Of A Tyrant’, will provide atmosphere of wrath and loss. At the same time, in many movements and transitions, will feels highly penetrating, with fanatic outbursts and inquisitive melodies – as if a storm that is relentlessly whipping upon the shore of Alaska. ‘Accursed Victory’, ‘Alas Phoenician, Despair!’, ‘Echos Of A Mighty Hall’, ‘Bloodlines Of Scorched Earth’… behold that spirit all over. As soon as ‘Ether & Steel’, ‘Thunder And Oak’ and ‘Anvil Of The East’ burst out, you will be persuaded that the drums on this album sound wickedly incredible and also played impressively by Bergwächter. With his tempting rolls, chops and charges all over the kit, it’s an ode to the forever captivating aura of analog sounding drums sound (that high hats, warworn snare and bass drums sound mixing ruleees!!), without robotizing the kick sound. Combined with their fantastic sense of songwriting, low-spirited bass lines and deep howling resentful vocals – with all these tracks, you will be treated yourself with unrelenting Black Metal to remember. Welded over the most suitable production and encapsulating album art revealing lamentations of grief and glory (Warhead Art) – the whole 50 minutes of this record will even be more enticing, the more you listen and the more you carve up each song. By all these, RÜBEZAHL can surely be regarded as one of the most arresting acts to emerge from the depth of Alaska. Provocatively after their engrossing debut EP “Tempering Of Northern Iron” in 2019, with this full length the Alaskan troopers are on the right path to continue their stride – under the snowy wonders, borealis night and thee howling of alpine winds. To experience this, this album now released as 4-panel digipak (restricted to 300 copies and comes with an inviting t-shirt) and also digitally through Deviant Records. To know more about the band and label, visit www.facebook.com/rubezahlblackmetal, www.facebook.com/deviantrecordsbm.