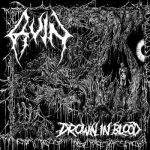 California’s Death Metal destructive duo RUIN have surfaced with their debut album titled "Drown In Blood". The band remains a bit of a mystery as not much is known about them other than they had a demo released in 1991 and then disappeared into obscurity only to rise again in 2015 with their "Spread Plague Hell" demo. Drummer David shares duties in 2 other bands: AETERNUM and OSCUROS, but again that is pretty much all I could gather about the band. RUIN plays a form of old school Death Metal with slow sludgy riffs that pay homage to another era. The vocals remind me of a more guttural version of Killjoy’s vocals from the mighty NECROPHAGIA. The guitars are reminiscent of old INCANTATION with heavy picking and that set up a nice wall of sound. Lyrically it’s your typical Death / Sickness / Torture themes. So let’s get into this debut, the first track ‘Crawling Through The Vomit’ starts off with an eerie sounding interview from a movie (not sure if it’s a movie or just one of those random interviews) then quickly kicks in with a guitar solo that sets up the ambiance. The song’s tempo varies throughout the 4 plus minutes. Track 3 ‘Sewer’ starts off with a solid Punk drum beat and quickly picks up speed. This track really stood out and brings out the best in the band. ‘The Thirst Of Annihilation’ keeps the momentum going with another decrepit nihilistic Doom inspired audio assault. The last track and title track starts out with a spooky gospel sounding old preacher spreading the word which lays the foundation for the music to follow. Again the band really changes things up tempo wise going from a snail’s pace to a mid tempo thrashy sound, but at the same time capturing the essence of death. Well there you have it, a solid heavy Doom slab of Death Metal that seems to be on a major resurgence. While RUIN have been around off and on since 1991 they remain new players in the scene. This album had some songs that really stood out but it had moments where the song(s) dragged to the point where I just skipped to the next track. Overall you get 8 tracks that clock in at just under 37 minutes. This is a decent debut album and think this band will only get better with time. For more info: https://ruindeath.bandcamp.com, www.memento-mori.es