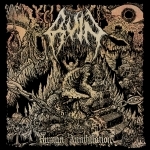 RUIN were a short lived Death Metal band from California, who released a demo tape at the beginning of the 1990s. This information could be seen as redundant if their guitar player Mihail Jason Satan hadn’t restarted the band after a nearly 25 year long break with a completely new line-up in 2015. Since then, RUIN turned into a kind of releasing machinery who put out a bunch of split releases, EPs and compilations for tiny underground labels plus a full album for the Spanish lunatics from Memento Mori last year. Now, just three years after RUIN rose from their grave, they are here with their second full length “Human Annihilation”. And what a bastard of an album this one is! Extremely down tuned, heavy as fuck and rude as hell, that’s the best way to describe how RUIN sound on this album. Doom / Death Metal of the oldest school meets REPULSION, and this conjunction sounds like a casket full of maggots. Terror lurks on every corner, just out to chase the living. There is one song title that perfectly fits to the music on RUIN: ‘In Horrific Disgust’! But this is not the highlight on “Human Annihilation”. To me, the slower monsters are the real highlights here. There is the creeping and gloomy ‘Death Meditation Trance’, a real lava stream of Death. And of course I need to mention ‘The Embrace Of Demons’ with its somehow psychedelic middle part that’s the perfect musical implementation of the idea behind the song title. With ‘A Grisly Fate Awaits’, fans of AUTOPSY should be deeply pleased and the final ‘Shadows’ is a perfect summary of a perfectly rotten Death Metal album that avoids any technical nick-nack like the plague. Lovers of gore and death should visit https://theruindeathmetalcult.bandcamp.com or www.memento-mori.es